Heroes in Our Midst

Heroes walk among us; they are in our midst everyday.

Heroes in our midst is a podcast about the power inside the heart, the human behind the story, and the collection of idiosyncrasies that both make us unique and bond us together through a common humanity.

Join us as we are inspired, as we learn and as we are challenged to be better by the heroes in our midst and the stories that they tell.

Justin Duff played volleyball for Canada, but he did not get there without being cut and spending time on the bench.  He was cut from his JV volleyball team (he had never played before), he was cut from the Team Manitoba Canada Games Basketball team (when he was 6’6” with a 40 inch vertical) and he was not a starter in his first year of university volleyball with the University of Winnipeg.  His volleyball development started when a coach at his school said to him, “Hey Justin, you could be good at this if you try.  I am going to help you try.”  When he was cut from the Canada Games basketball team, the staff at Volleyball Manitoba encouraged him to play volleyball telling him,  “they would help him become the player he needed to be.”  That player went on to represent Canada in volleyball at the 2016 Olympics in Rio as well as several other national team events.

Reflecting on his career, Justin is most proud of the shift he made from a talented, entitled kid to someone who was just willing to give his all and support the development squad.  Recently retired, Justin is a now a Dad and MBA student.  When asked for one piece of advice he would share he told us, “try to understand things that you have an issue with and don’t just dismiss them, you can learn something.”

We hope you enjoy our conversation with Justin Duff.

Janine planned on playing basketball at the University of Manitoba, but a chance meeting at a Karate class in the summer of 2000 changed all that when someone suggested she try rowing.  After a rough few days that included a few bruises and some unplanned swimming when her boat flipped, Janine found her rhythm and made the 2001 Canada Games team for Manitoba on her way an 8th place finish at the Olympics in 2008 and an Olympic silver medal in 2012.

In her interview Janine tells us that she was never the strongest or the tallest or the post powerful, but that she could feel the boat and she was good at talking!  Her strength was her positive attitude and her ability to make the boat go fast, regardless of who was in it.  From others we hear that Janine was the heart of her teams, the voice that united them and the positive attitude that prevailed.

Now a full-time coach and mom of twin girls, Janine continues to impact the performance of athletes through her role as the provincial rowing coach for Manitoba.  Please join us to hear Janine’s story as we uncover the Heroes in our Midst.

Chantal Van Landeghem was in the pool before she could walk.  Her Dad would take her and her sister to the pool to play and just spend time in the water.  That early introduction fostered Chantal’s love of the water and contributed to her feeling at ease and at peace there.  She dreamed of making a national team and going to the Olympics as early as age 5 and at age 12 she attended her first international competition as a junior athlete on Team Canada.

Fast forward several years and Chantal would join 3 teammates on the podium for Canada’s first swimming medal in 40 years and the first for Canada at the 2016 Rio Olympics.  A triumph for sure, but it was not without heartbreak.  Chantal missed making the 2012 Olympic team by .01 of a second.

Now retired from swimming, Chantal is pursuing her PhD in Clinical Psychology and plans to work with athletes and others to support them on their journeys to being their best selves and accomplishing their goals.  She loves that her career affords her the opportunity to give back.

Toogood Consulting @ConsultToogood
2 months ago
Be the Master of Your Mind. 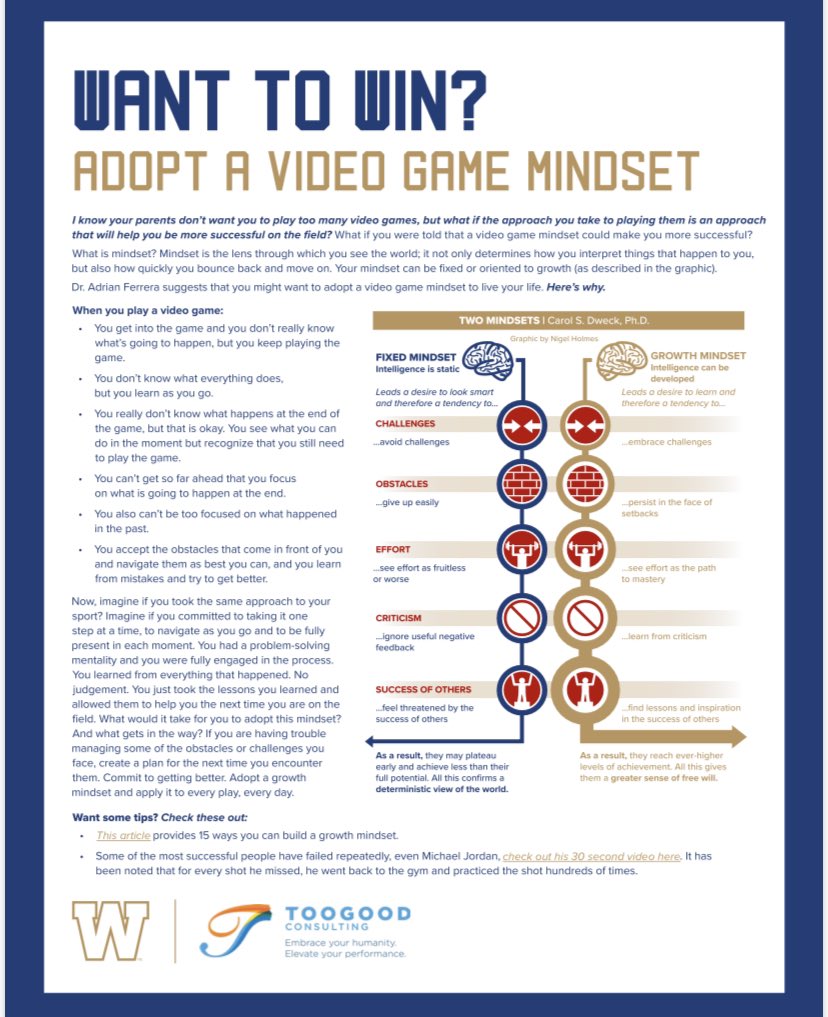